nd so it begins… the Cuban dance with U.S. investors.  It stepped up and out in a new Cuban Foreign Investment Act (May 2014) and the executive actions of President Obama to normalize relations first announced in December 2014.   The most visible dance partners were seen this March when Starwood Hotels and Resorts signed an agreement to manage three hotel properties in Havana, Cuba.  This announcement was enhanced with an amended merger agreement between Starwood and Marriott International, Inc.

The Cuban hotels are attractive even before the anticipated Starwood renovations and luxury upgrades. The landmark historic Hotel Inglaterra (1875) enjoyed recent Cuban government restoration alongside the recently restored Grand Theater and the nearby Capitolio, soon to once again house the Cuban National Assembly.  It faces Central Park from which the avenue Paseo del Prado leisurely strolls down to the Malecon seawall alongside Havana Bay and Obispo Street that channels visitors into the colonial past of Havana Vieja, a UNESCO World Heritage Site.

A second partner, the Hotel Santa Isabel was once a 19th century aristocratic residence that is located on the Plaza de Armas, the city’s founding square housing its first fortress and the Governor’s Palace.   President Jimmy Carter has stayed there (when he was out of office) and in addition to its wonderful location, it is a small hotel (27 rooms) with an elegant feel that will easily become a regal beauty.  The working partner for this hotel is Habaguanex which is overseen by the prestigious city historian’s office.

The Hotel Quinta Avenida is located in the upscale Miramar area of western Havana that houses many foreign embassies, especially along Quinta Avenida (Fifth Avenue) known as the Avenida de las Americas.   The Miramar Trade Center (office district) and the nearby International Conference Center make this hotel a potentially important business destination.  The hotel partner is the Grupo  Hotelero Gaviota, financially backed by the Cuban military, and expanding its Gaviota Tourism services into the U.S. market.

As a backdrop, Cuba has been issuing licenses in numerous categories that allow Cubans to open private businesses, hire other Cubans and earn profits.  Initial steps were small shops and businesses run out of homes.  Licenses became available for scores of new opportunities to invest all your time or free hours from government jobs.  Hairdressers, cooks, taxi drivers and others tested the waters.  When the limits on family visits were relaxed and more dollars could be received from abroad, these business opportunities received money injections from extended Cuban families in the U.S. (Florida mainly) and Spain.   The most noticeable evidence is the proliferation of Paladares, private restaurants in Cuba that have re-vitalized the food scene for tourists.  Just a couple years ago, your choice of foods in state run restaurants centered on colonial inspired dishes of pork, chicken, rice and beans with some enigmatic fish offered occasionally.  Paladares are featuring international menus and proudly name a variety of daily fish specials.

The March 2011 approval in the Communist Party for private enterprises had the initial impact of government worker reductions. Since that shock, the hope it has generated is palpable among the young and middle age workers yearning for a positive change and the opportunity to live more closely to the modern world they were increasingly aware of and bumping into.

Of course the rest of the world has a head start on investment in Cuba, especially around the new Mariel Port Special Development Zone.   But the U.S. has the opportunity to make a real change, especially in telecommunications and the creation of needed hotel rooms.   Statements that indicate the historical standard 51% government ownership stipulation can now be negotiated is a positive step.  Hiring Cuban locals has always made sense due to their universal and excellent education.  The wage levels will be maintained by the Cuban government in line with the general population but will allow for incentives.   One of the major surprises for me in two decades of travel to the island is the high quality of interest and effort by many of the hospitality industry workers.  The staffs are unfailingly professional even though challenged at times by lack of resources.

The current tourism explosion of a record 3.5 million world-wide visitors in the latest year stats with exploding numbers of U.S. travelers has produced high demand for everything.  Hotels are booked months in advance with the current demand being met by thousands of families renting out rooms in their homes through Airbnb and the government agencies. When Cuba was isolated and part of the joy of visiting was to partake in its mystery, some inconveniences could be overlooked.  But as it opens up to regular visitors, it will increasingly be compared to other historical and beach destinations that have had years of investment.   In that new analysis, quality and pricing will become important.  Most of the older properties in Cuba will welcome injections of U.S. capital to renovate the rooms to standards competitive in today’s U.S. and world market.   Starwood Hotels and Resorts is undoubtedly the first in a conga line of U.S. investors.

Scott Schwar is a partner in The Committee on Illinois (dba Cuba Tours 4U) and has been leading medical, legal, college, sports, religious, business and cultural groups to Cuba since spring 2000. 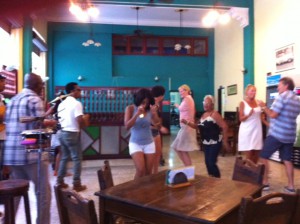